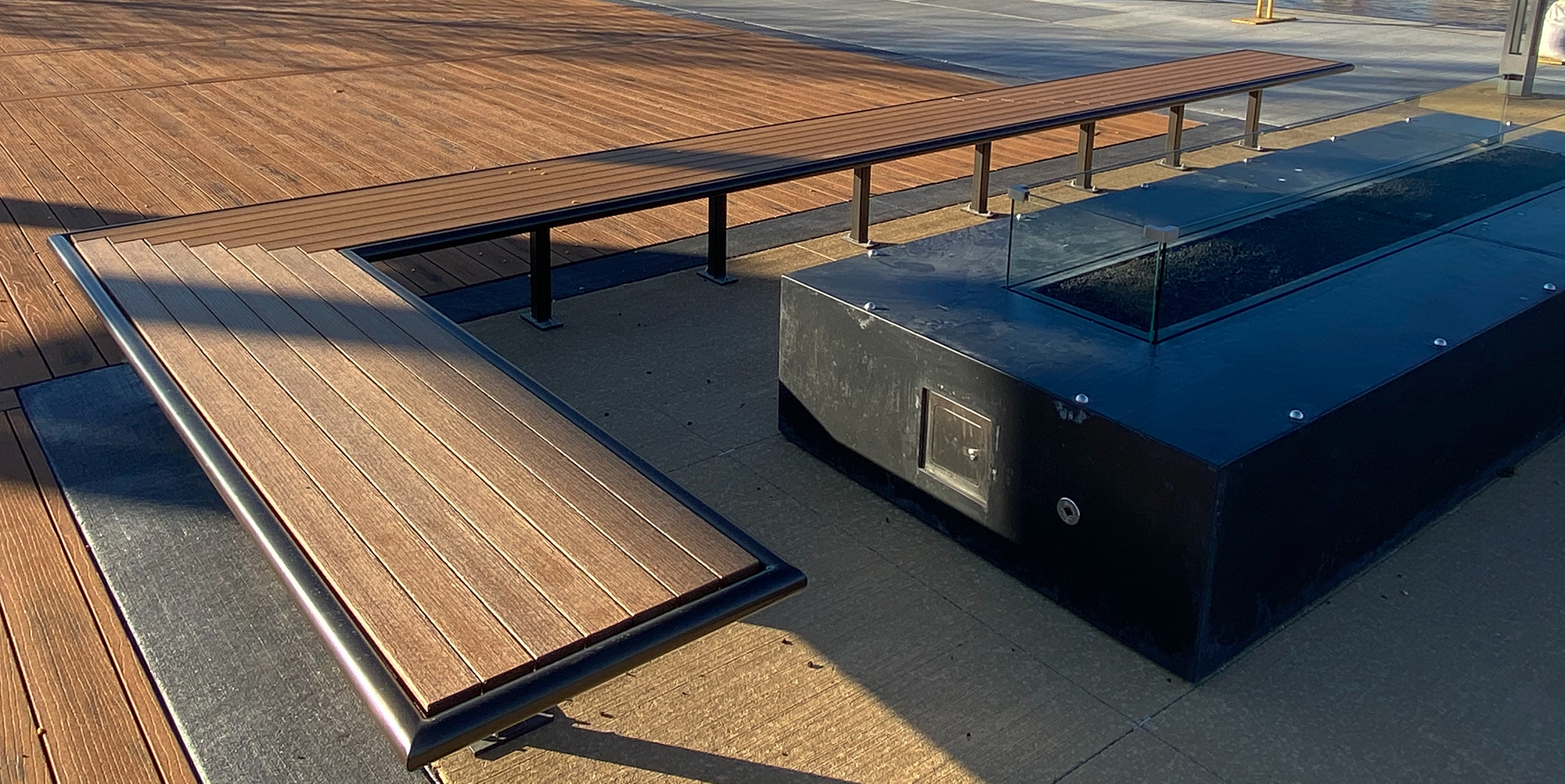 The removal of a parking deck and the loss of around 250 parking stalls could have been a "hit" to businesses in the city of Janesville, WI. But city management saw it as an opportunity to contribute to the betterment of the downtown area by creating a more robust town square.

"Our goal was to make downtown Janesville a destination," says Matt McGrath, a Civil Engineer with the city of Janesville. "Anything we can do to promote people stopping down and visiting the square to do a little shopping in our community, spend the night, have a meal or something like that, that's what we wanted."

City improvements started in 2017 and have most recently included the installation of a fire table with custom benches wrapping around the table that offer seating to enjoy this amenity. 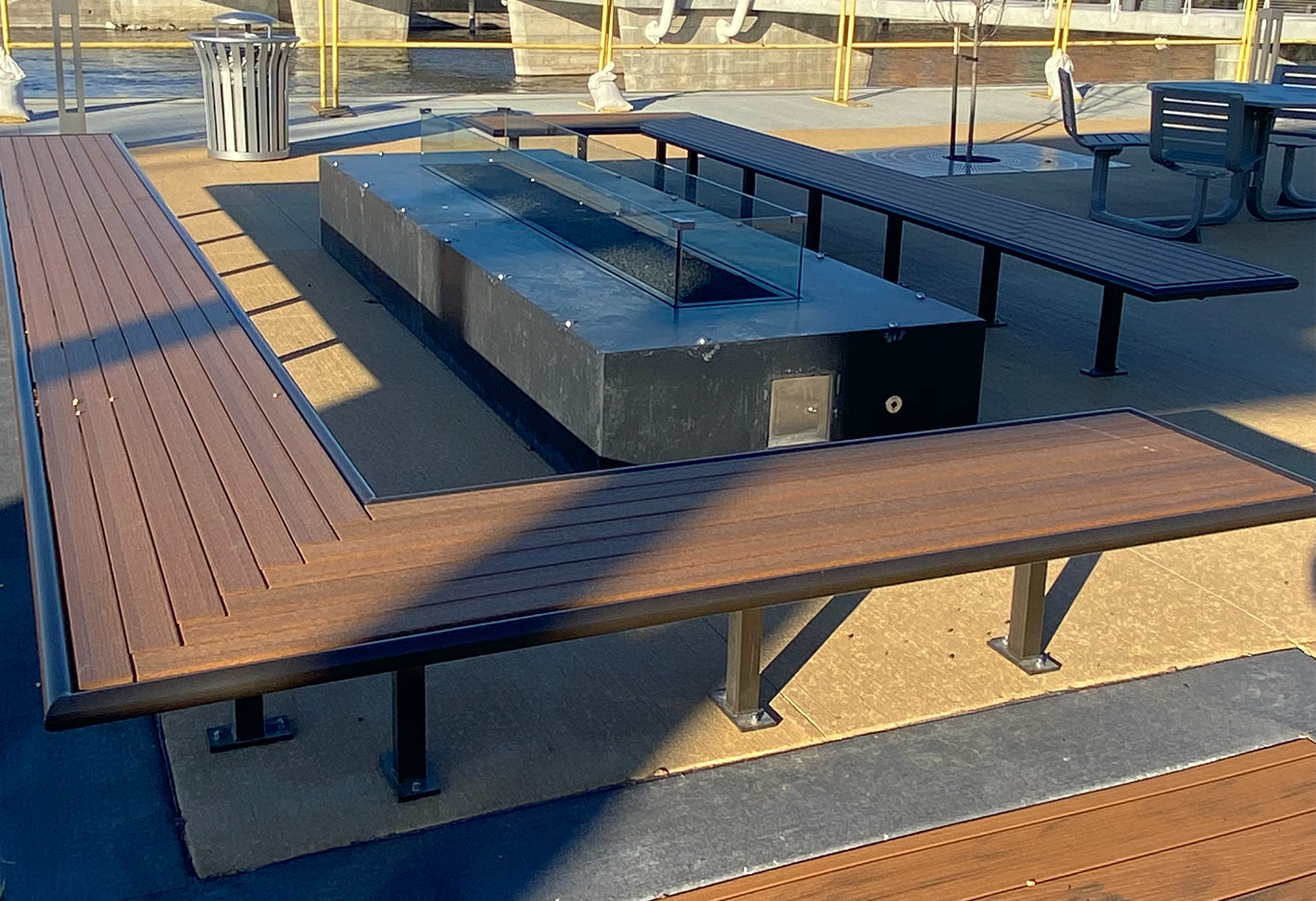 But even with a place-making destination as the goal, there wasn't unlimited real estate to work with. Which played a part in choosing this amenity to accomplish the city's goals.

"We wanted to provide amenities that fit and the fire table is an amenity that doesn't take up an awful lot of space," says McGrath. "It was also viewed as a feature where people could come and just sit and relax, carry on a conversation with their friends or family."

But the design of the L-shaped benches wrapping the fire table, was not the first design choice. It was originally proposed to have limestone boulders for seating on one side of the table and bench seating on the other. But just before construction started, the public-private partnership decided not to go forward with the limestone benches.

After reviewing with Zach Simpson, the Project Lead with Strand & Associates, the lead design team for all the city square work, they decided to expand the bench seating around the table.

"Zach provided us with the original drawing from paper that showed the black rail structure for the bench and the brown slats," explains McGrath. "That was something that caught our eye right away and we liked it." 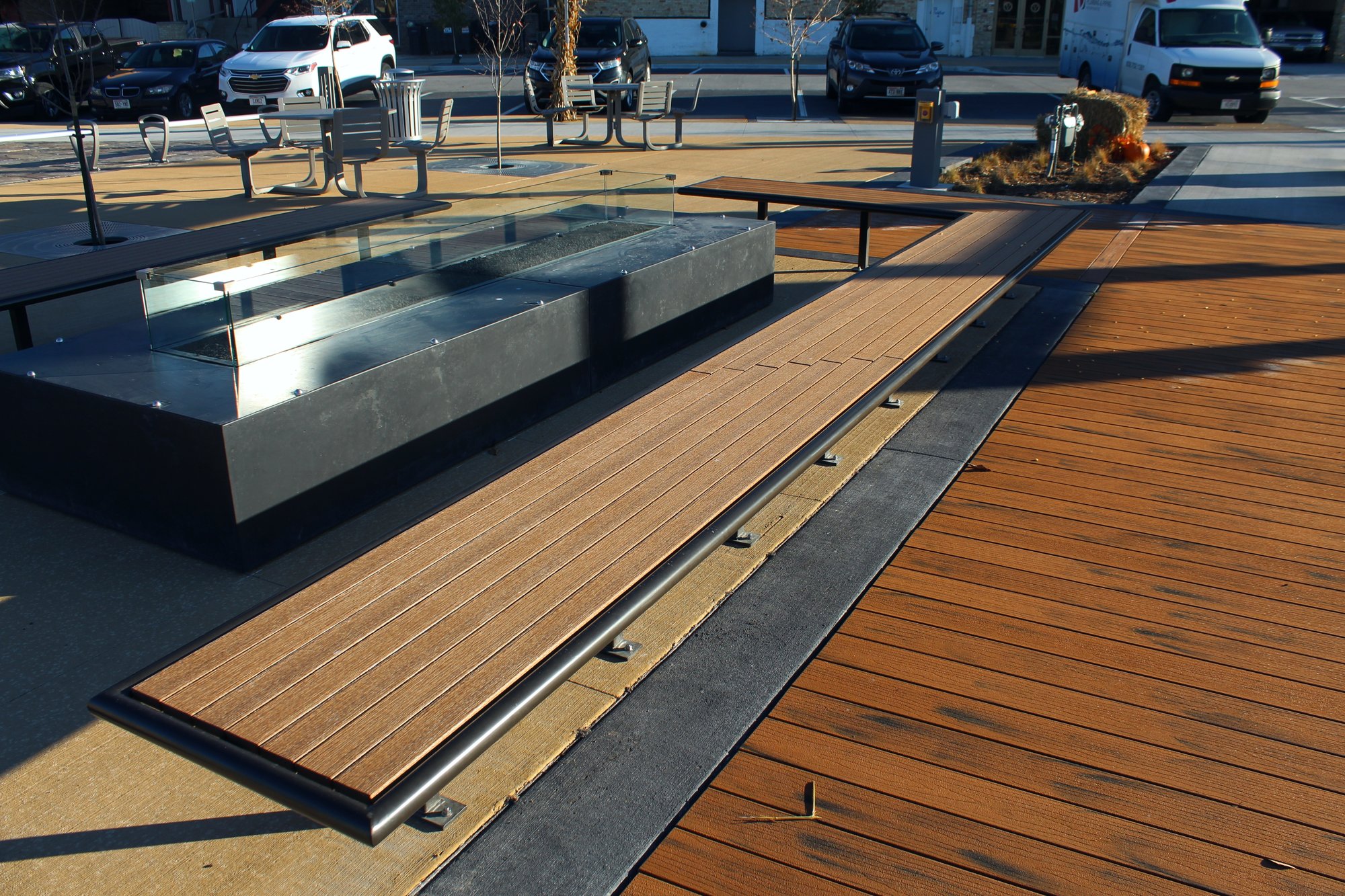 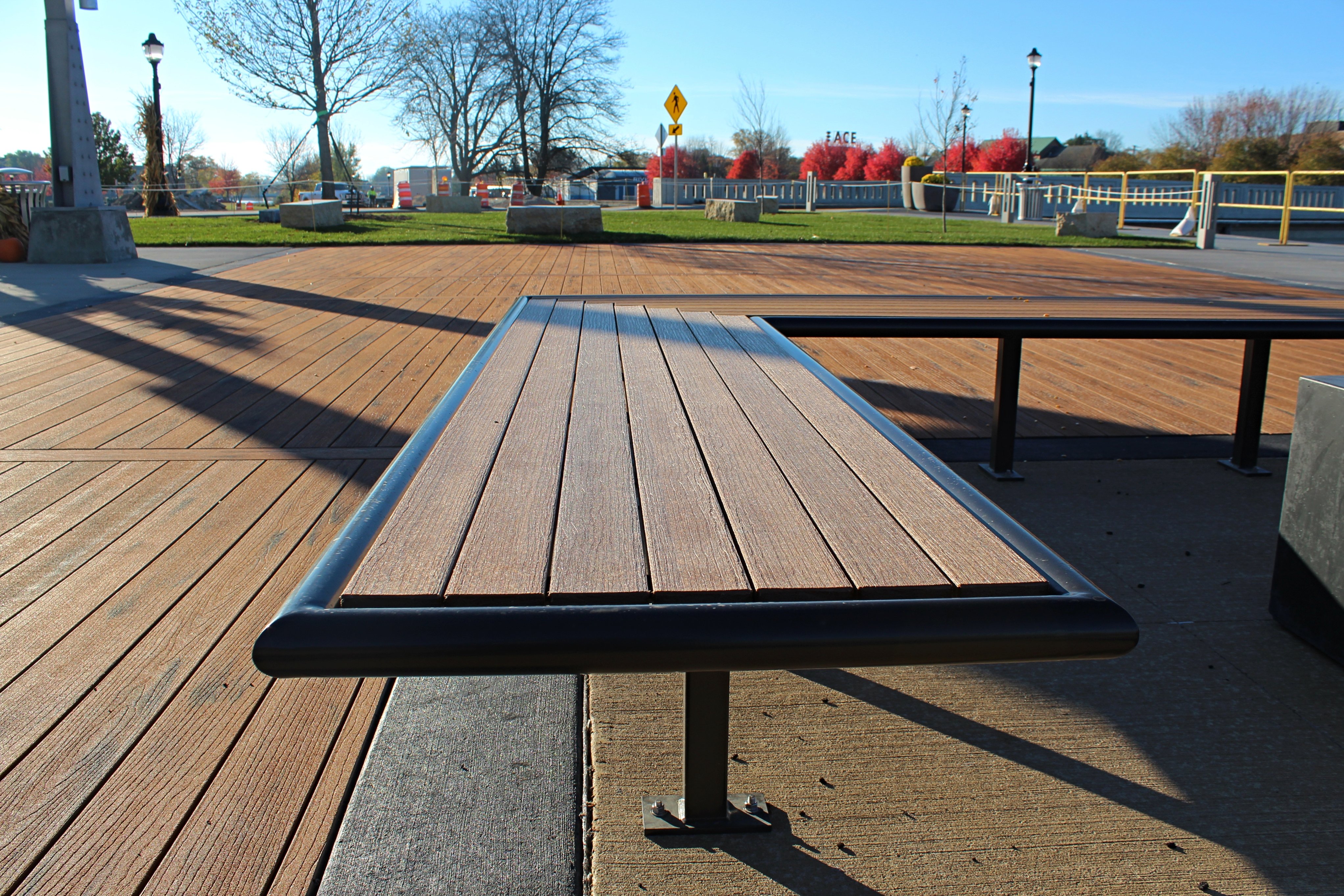 In addition to an aesthetic appeal, the city had a desire that the seating require no maintenance. This led to a material selection of recycled plastic.

"I know there's wood out there that is low maintenance, but not no maintenance," says McGrath. "That's what was driving that decision." 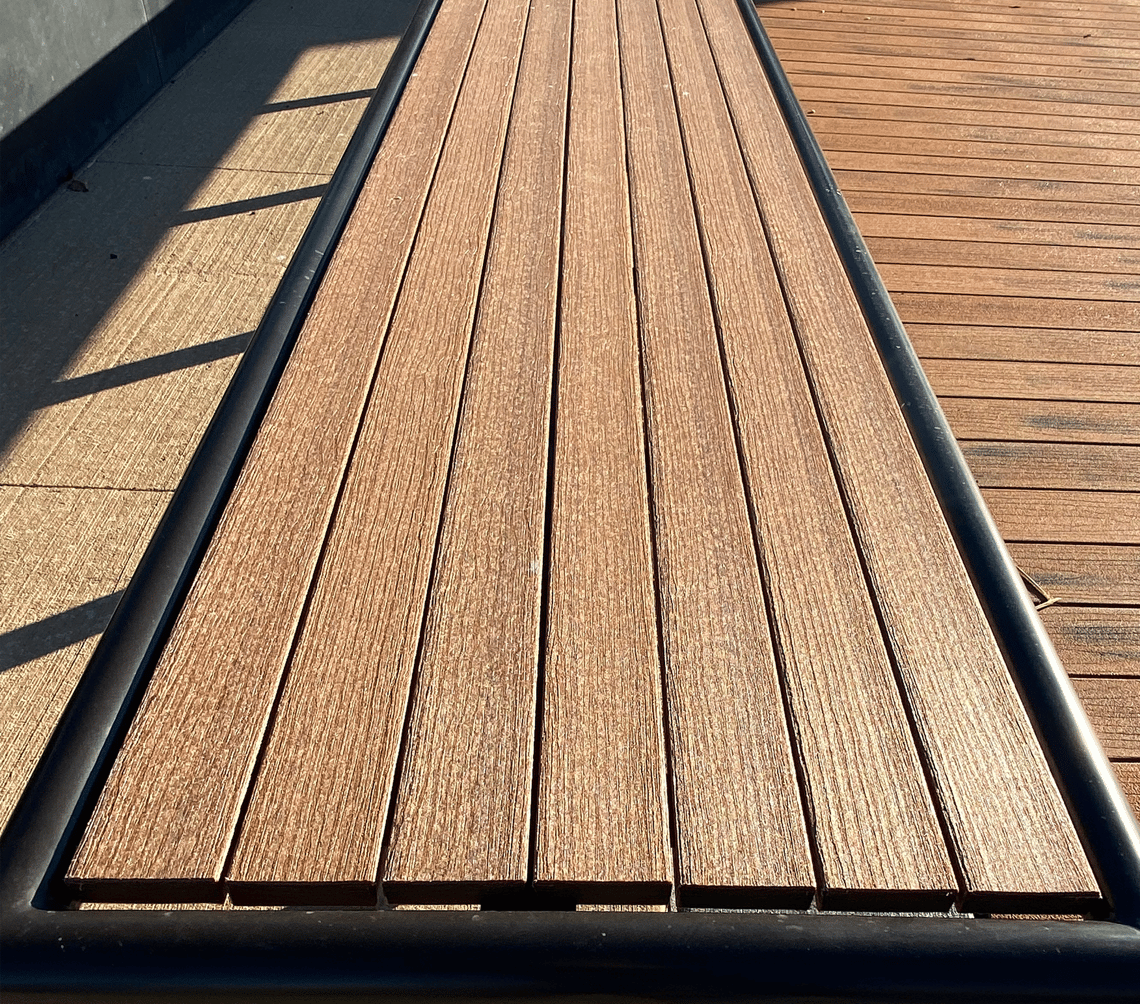 They also wanted the amenities of the town square to stand apart from the other standardized site furnishings of the city, which lead to creating custom outdoor benches.

"For the town square, we wanted to set a little higher standard and provide amenities that were custom rather than off-the-shelf," says McGrath. "Our underlying philosophy from the get-go was to make things different and make things stand out from other areas in the city."

And the city of Janesville has been able to accomplish all this and successfully execute their revitalization project.